Day 1 : Delhi Arrival (D)
Welcome To Delhi, Japji Travel Representative Will Meet and Asist at Delhi Airport, After Pickup Transfer To Your Pre Booked Hotel.  Afternoon Visit Delhi Half Day City Tour See Qutab Minar - Qutab Minar is among the tallest and famous towers in the world. The minaret is 234 feet high and the highest individual tower in the world and Humayun Tomb - Humayun, the eldest son of Babur, was the second emperor of the Mughal Empire. Unfortunately, he was not able to rule for a long time and met with his untimely death after he fell from the stairs of the Sher Mandal library. Dinner and Overnight stay in delhi hotel.
Day 2 : Delhi Sightseeing Visit (B,D)
After Breakfast at Hotel, Visit Delhi Full Day City Tour See Lotus Temple - is an important landmark in the city of Delhi. This place of worship of the Bahai sect is literally constructed in the shape of a large, white lotus flower. Old Delhi Visit  Red Fort - Mughal ruler Shah Jahan had varied needs of this fort and it was made according to those needs, Rajghat - It was at the Rajghat where Mahatma Gandhi's last rites were performed on 31st January 1948.  Dinner and Overnight stay at delhi hotel.
Day 03: Delhi - Agra (B,D)
Take Morning Breakfast at hotel and Drive for Agra by car (approx 4 hours). On Arrive in Agra. Checkin Your Hotel. In the afternoon you’ll have tour of the city. Agra Fort - Emperor Akbar the Great commissioned the Agra Fort that is also sometimes called Red Fort of Agra. During the reign of emperor Jahangir, the capital was briefly shifted to Lahore but Agra became the seat of Mughal capital one again in the reign of Akbar and Marvel at the Taj Mahal - built by Emperor Shahjehan. Evening Time Free For Shopping / Local Markets.Dinner and OverNight Stay at Agra Hotel
Day 04: Agra Sightseeing (B,D)
After breakfast at hotel, visit Sikandra - where you’ll see the magnificent mausoleum of Emperor Akbar the Great and Tomb Of Itimad Ud Daulah - Itmad-ud-daula has a special place in the chronicles of both history as well as architecture. This is precisely because Itmad ud Daula is the very first tomb in India that is entirely made out of Marble. Evening free at leisure. Dinner and Overnightstay in Agra Hotel.
Day 05: Agra - Jaipur (B,D)
After Breakfast at Hotel leave for Jaipur in the morning and make a stop to visit Fatehpur Sikri - the city built by Emperor Akbar to commemorate the birth of his son. On Arrive in Jaipur. visit the City Palace - situated in the heart of Jaipur's old city. The palace is a blend of Rajput and Mughal architecture, it houses a Seven storied Chandra Mahal in the centre. and museum with its vast collection of paintings. Evening free for local market / shopping. Dinner and Overnight stay at jaipur hotels.
Day 06: Jaipur Full Day Sightseeing (B,D)
After Breakfast at Hotel, Go for Jaipur Full day Jaipur sight seeing , visit Amber Fort - located 14 kilometers from Jaipur. The magnificent Amber Fort is a fine blend of Hindu and Muslim architecture. Return to Jaipur,  Hawa Mahal - (Palace of Winds), Jaipur's most distinctive landmark. Built in 1799, this is an amazing example of Rajput architecture, Birla Temple - The Birla Temple dedicated to Lord Vishnu and Goddess Laxmi is yet another major attraction in the Pink city of Jaipur.
Optional
Enjoy an evening excursion to Chokhi Dhani ( 30 km from Jaipur) (at your own cost) , an ethnic village resort offering a typical Rajasthani experience. It offers Rajasthani village ambiance, a variety of traditional dishes and dance and music performances for entertainment. Later drive back to the hotel.
Dinner and Overnight stay in jaipur Hotel
Day 07 : Jaipur – Delhi Departure (B)
After Breakfast at hotel, Checkout From Hotel Drive To Delhi (approx 6 hours) On The Way See Jal Mahal - Jal Mahal of Jaipur is a pleasure palace built in the 18th century. Situated amidst the picturesque Mansagar Lake, the palace has the Nahargarh hills forming its backdrop. Later Drive To Delhi. On Arrive in Delhi Transfer To Rly Station / Airport For Your Onward Journey. 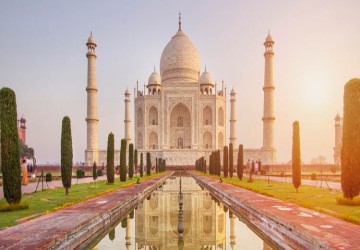 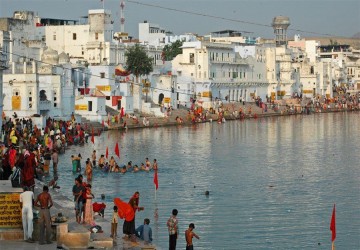 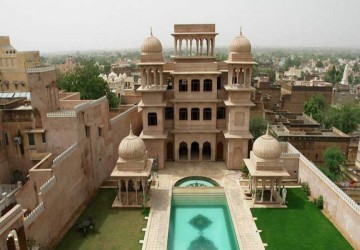