Jaisalmer Fort - In the middle of the great sands of Rajasthan’s Thar Desert stands the majestic Jaisalmer Fort on Trikuta Hill, once the scene of many battles. It’s come a long way since and today it is better recognized as a UNESCO World Heritage Site. It is considered to be a living fort as even today a quarter of the population of the old city live within its precincts.

History of Jaisalmer Fort
This fort was built by the Rajput king, Rawal Jaisal in 1156 AD, hence the name. It is the second largest fort in Rajasthan and historically it was geographically located at the crossroads of the Silk Route.

Architecture of Jaisalmer Fort
This fort is a spectacular 250-feet in height and is protected by walls 30 feet long. It has 99 bastions, of which 92 were built between 1633 and 1647. They depict a fusion of Rajput and Mughal architecture. The fort can be reached by any of its four gateways which are named as Ganesh Pol, Akshya Pol, Suraj Pol and Hawa Pol.

This fort is also distinctive for its yellow sandstone walls which are lion-coloured during the day and after the sun sets it turns to honey gold. No wonder it also got the name of Sonar Quila or Golden Fort.

Jaisalmer fort is built on a hill whose maximum height is 250 ftabove its environs. Its basement has a 15 ft tall wall that acts as double protection. A chain measuring 30 ft takes on the role of bastions to the fort.
Jaisalmer Fort was impregnable to Muslim marauders like Emperor Humayun and Ala-Uddin-Khilji. Tourists who explore it these days find many architectural buildings like houses, palaces and temples made of the same sandstone as the fort. The fort also has narrow and winding pathways that meet at several parts of this structure.

Main Attractions
The main attractions to be seen inside the fort include the Raj Mahal, Jain temples and the Laxminath temple. The fort is made according to Rajasthani architectural norms and features a city against a brilliant yellow and red background.

From the fort, you can get superb views of the entire city. Most of the houses here are built in yellow sandstone which creates a beautiful aura in sunlight. The sights not to be missed here include Maharawal in Chauhata Square, Tazia tower and Jawahar Palace, the royal family’s former residence.

There’s also a museum that showcases the weapons, utensils, dresses and jewellery of the Rajput kings. The ornate carvings and designs on the four entrances of the fort are also splendid. The narrow pathways have typical homes with balconies, archways and decorated windows that point to an age in time.

Conclusion
To step back in time and gape at amazing history, a visit to the Jaisalmer Fort is necessary. Do visit here and be stunned by all you see. 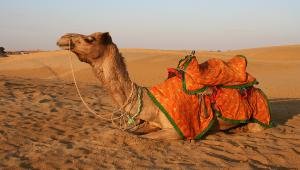