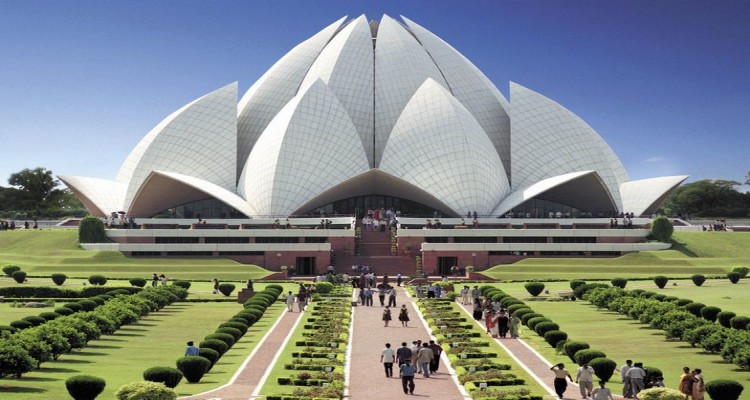 The Lotus Temple is an important landmark in the city of Delhi. This place of worship of the Bahai sect is literally constructed in the shape of a large, white lotus flower. An architectural feat in itself, this beautiful temple is flocked by people from all religions, a living example of the openness and equality promoted by Bahai laws. One is allowed to read or chant from holy scriptures belonging to any religion, but nobody is allowed to play musical instruments, give sermons or hold religious ceremonies inside the hall.
The Temple was built during 1980 - 1986 costing Rs 10 Million. The Temple is a Half Floating Lotus set amidst pools and garden. The petals are made of white marbles. The petals are made of special concrete clad with white marble, extracted from the Mount Pentitikon mines in Greece. It is the Only Bahai Temple of Worship in Asia. The Lotus Temple today is among the masterpieces of the 20th Century and also winner of International Prestigious Awards. This Temple has no Idols of any Deity and God. It has a Prayers Hall for Meditation for Faith of all Religions. One should always try to participate in Unique Prayer Sessions that Recite Teachings from All the Religions. It is carrried on approximately for 2 hours. One should also visit the Information Center Providing Information on Facts of Bahai Faith in form of Photographs, Written Texts and Film.
Attractions Name