Welcome to Jodhpur Rajasthan - a land of legendry kings, warrior, royalty and a state at its colourful best all the year round. A place of fusion beyond imagination. Fusion of rich history, culture, religion, art and craft, music, dance, desert, sand, stone, lakes, fort, palaces, wildlife, birds and above all the best part friendly people all around you.

The place where sun rays crates Mrig Trishna the illusion of shimmering lakes on the arid expanse. Here you can feel the silence of Sand-Dunes and the rore of sand-stromes at the same time. This is the land of overwhelming Romance of the Desert. Here the life vibrates to the sound of music and rich culture. This is not about seeing all these colours, but it about feeling in your self.

Above all the Rajasthan is a favourite tourist destination, especially well-known for its desert triangle JODHPUR, JAISALMER AND BIKANER, the three stone-sculpted cities rising out of the golden sand of Rajasthan. JODHPUR, Bikaner and Jaisalmer broadly consisitute the harsh desert region of western Rajasthan, formerly known as Marwar

JODHPUR, once capital of the former princely state of Marwar, is now the second largest city of Rajasthan. Flanked on its western side by the Meharangarh Fort, and on the eastern side by the stately sandstone Palace of Umaid Bhawan; the monuments, temples and gardens of Jodhpur depict a multi-faceted grandeur. Founded in 1459 A.D. by the Rao Jodha, Jodhpur gradually grew around the towering Mehrangarh Fort build as stronghold on the advice of a sage. The beauty and the imagination that have gone into the making of this monumental city proclaim the life-springs of creative genius that appear incongruent with harshness of this land and its climate. 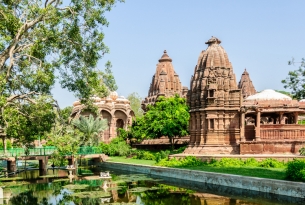 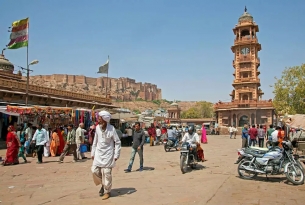 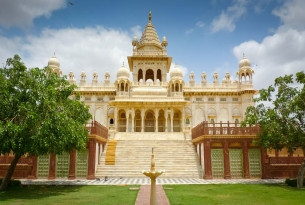 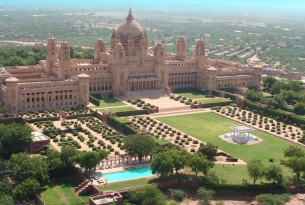 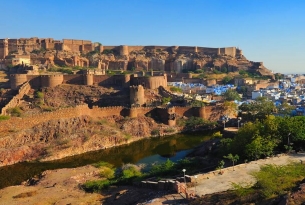